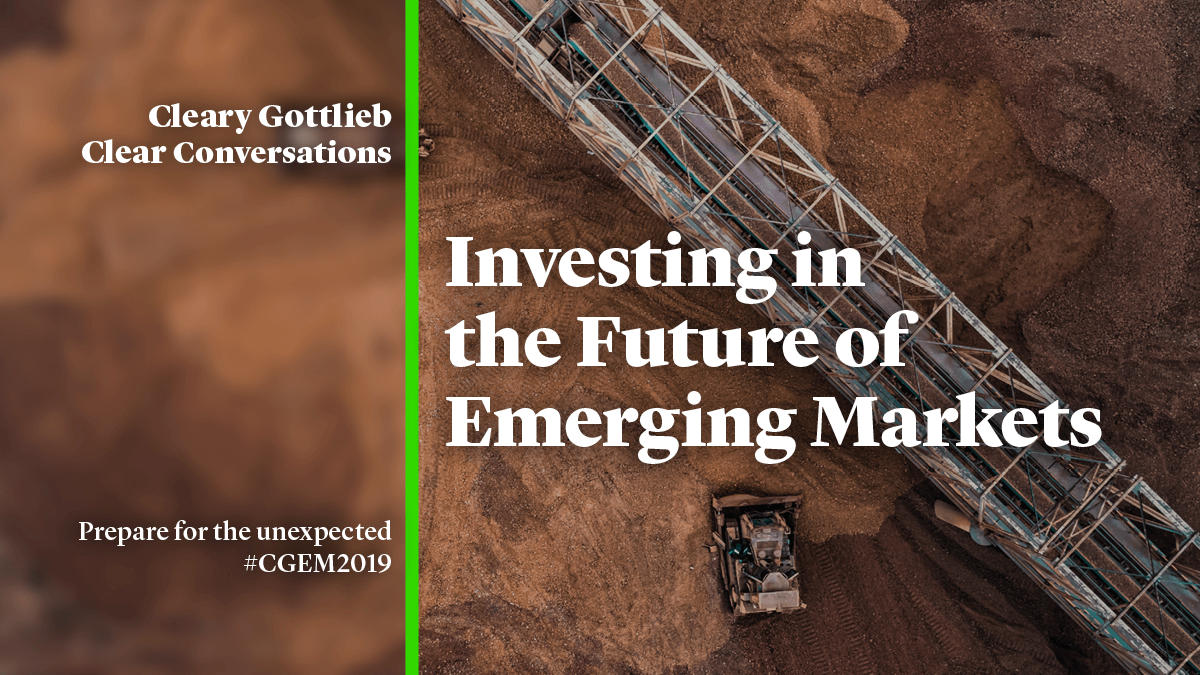 The rewards of investing in emerging markets can be extraordinary: from ground-breaking and history making deals, to being the first to tap new opportunities. But those same factors also make it a riskier venture than most.

These are regions and industries where scope for error, misunderstandings and disputes is frequently heightened, either through the intricacies of operating under particular regional cultures and local processes, or the technical expertise required by complex, regulated sectors. No matter how conscientious the due diligence and how watertight the contracts, every investor needs to factor in the ‘what if’.

By contrast to the general boiler plate approach to dispute clauses, where the risk of needing to rely on the clause is higher, there can be real value in considering issues in more detail - such as the specific rules and forum selected, the substantive dispute resolution mechanism, what other protections are potentially available and how these might be impacted by how the investment is structured.

The Right Tool for the Job

When it comes to the macro environment, many investors favour arbitration processes over court proceedings because of the privacy and flexibility they offer. But making the most of these advantages depends on carefully thought-out dispute resolution clauses, developed with specialists in a range of options and with access to leading local expertise in multiple jurisdictions.

“The risk for disputes arising out of investments in emerging markets can be quite high, and the underlying transactions often involve states or state-owned entities or commercial parties investing in high-stakes projects in challenging political and business environments,” says Chris.  “While arbitration is an effective tool for emerging markets investments in several ways,”   it’s essential that arbitration clauses for these parties are given as much thought and care as financing and other commercial aspects.”

This is particularly the case if parties are considering whether to incorporate the rules of one of the newer arbitration centres in an emerging market (which may be well suited to the parties’ needs) rather than one of the more traditional choices such as the LCIA or ICC rules, or where the parties are considering whether to base the proceedings (the legal “seat”) in a jurisdiction other than those commonly chosen for international arbitration, such as London or Paris.

As the use of arbitration in emerging markets deals has risen, so too have steps been taken to establish and improve arbitration centres to administer arbitrations within the relevant regions. For example, Rwanda’s Kigali International Arbitration Centre (KIAC) has registered over 100 cases since its 2012 inception. The KIAC states that the majority are international cases and believes that the size of its caseload shows increasing confidence in the quality of its arbitration.

Staying Ahead of the Conversation

International treaties afford differing levels of protection to foreign investors, including in some treaties, mechanisms allowing investors to bring arbitration proceedings against the State hosting their investment. Of course, as emerging markets evolve, so do the scope, priorities and interests of the stakeholders in these regions. In recent years some states in emerging markets jurisdictions (including countries in South America and Africa) have taken steps to move away from this type of investment treaty arbitration. This includes terminating bilateral investment treaties in favour of legislation requiring foreign investment disputes to be resolved via different mechanisms.

This has taken different forms across jurisdictions but, in general, the move provokes debates about who is really protected. In India, for example, reviews of the country’s multiple treaties led to revisions that some viewed as a more appropriate realignment of investors’ rights and that others believed retracted protections.

However, what’s mainly driving the change is a prevailing belief among some that treaties have previously favoured investors over states and the citizens they represent. This has led governments in recent years to reappraise many of these agreements and to be more closely involved in their development.

So, while debate is increasing about whether traditional investment arbitration infrastructure is fit for purpose, this presents an opportunity for market actors to be part of the debate and to help shape the changes. With vast experience advising both states and investors on investment protection and dispute resolution issues, Cleary Gottlieb is uniquely placed to engage with these developments and to advise clients on how best to structure their investments in order to maximize investment treaty protection before the investment is made or to represent parties in investment treaty arbitrations after disputes have arisen.

The firm leverages top tier skills in emerging markets in financing, mergers and acquisitions, insolvency and other areas, to advise on  investment structuring at the outset, and on handling any related  disputes thereafter.  After all, according to Chris, “investors don’t think in silos and neither do we. We consider  the whole project and strategy and provide the client with pragmatic advice on how best to protect their investments. That’s the value of involving  Cleary Gottlieb from the start.”