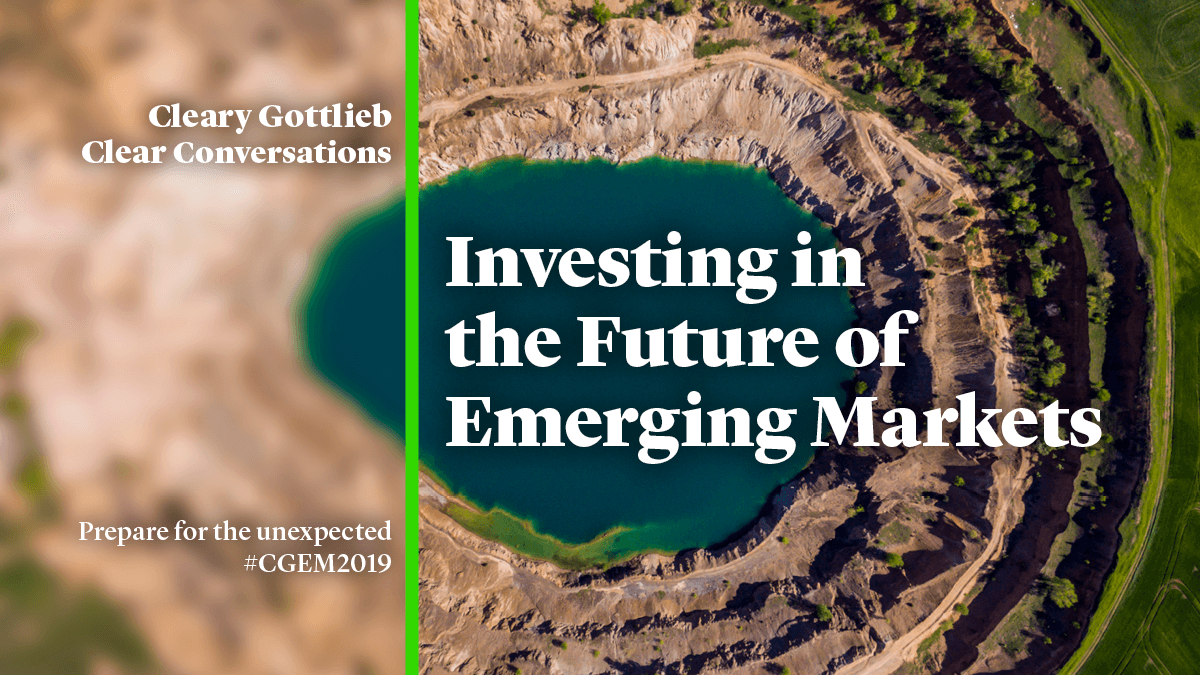 Seasoned investors know all about the sensitivity of commodities prices but, despite the market volatility, our global demand for natural resources isn’t going anywhere. In fact, whilst there may be a shift in focus to resources that support more sustainable lifestyles, estimates show that the global population is on course to triple our use of commodities including minerals, ores and fuels by 2050.

This increasing demand for commodities offers incredible opportunities for investors willing to be guided by experienced partners like Cleary Gottlieb, who as a firm have extensive and deep experience working on transactions in the mining sector across emerging market jurisdictions.

Of course, mining in these jurisdictions carries a reputation for being risky – and not without good reason. Investors today face obstacles that run the gamut from swiftly evolving regimes, political instability, corruption and social opposition through to insufficient infrastructure and environmental constraints.

Simply put, no matter how great the developments in infrastructure, technology and political frameworks over the last three decades, serious challenges remain and investors cannot afford to be without skilled advisors, partnering with them to navigate the complex balancing of risk and reward.

The case of Brazil’s Vale S.A. (Vale) bears the hallmarks of many of these issues – and shows how, with the right advisors, practical steps can be taken to protect investor interests from the complex challenges that can arise when investing in natural resources in emerging market jurisdictions.

In 2010, the company entered into a joint venture with BSG Resources Ltd. (BSGR) to develop an iron ore mining project in the Simandou region of the Republic of Guinea. The area is estimated to contain over two billion tonnes of high-grade untapped iron ore – one of the world’s largest such deposits.

The next four years would see a probe into BSGR by various authorities including a Technical Committee of the Republic of Guinea and a U.S. Federal Grand Jury with the aid of the U.S. Federal Bureau of Investigation, revealing in 2014 that BSGR representatives had paid bribes for mining rights between 2008 and 2009 to associates of the Guinean government - including the former president’s wife.

The investigation resulted in the Guinean government revoking the original licence and Vale losing access to decades of projected profits. This was despite officials absolving Vale of corruption or knowledge of the corrupt activity, because the bribes occurred before the joint venture began and the payments made were deliberately hidden from Vale by means of a sustained and systematic fraud.

A nightmare scenario, many would think. However, Cleary Gottlieb was able to navigate the repeated efforts made by BSGR to avoid a determination on the merits of Vale’s claim, and successfully represent Vale in London Court of International Arbitration (LCIA) proceeding against BSGR, securing a $2 billion victory in one of the largest commercial arbitration awards ever made.

Balancing New Challenges With the Old

While the scale is somewhat unique, the essence of Vale’s story is certainly not uncommon in natural resource investing and provides a valuable case study for others to learn from.

The combination of extraction industries and emerging markets mean investors can’t leave anything to chance – effective diligence, red-flag analysis and careful structuring needs to be carried out and measures need to be taken to ensure that investor interests are protected, particularly in light of the significant change taking place across various emerging market jurisdictions.

Part of this change includes the surge in environmental awareness and the associated resistance to large scale extraction projects in undeveloped areas. Investor activism is on the rise, with players like Norway’s Norges Bank divesting its fossil fuel investments.

Some leaders in the commodities sector are investing significant sums in improving the environmental impact of their businesses, including diversifying their business activities away from a primary focus on fossil fuels. These developments have the potential to impact how mining rights are awarded and governed, and managing investor sentiment around environmental performance will likely only get more demanding in the future.

In the midst of the tumult, investors need advisors that have grown with the industry and with emerging markets themselves. Cleary Gottlieb has a decades-long history of handling industry-transforming transactions in metals and mining, with a track record of closing some of the largest-ever deals affecting these industries.

The firm is international counsel to the world’s leading iron ore producer and helped to create the largest steel producer in the world. When it comes to emerging market extraction projects, every investment is complex and demands industry-specific skills. For Cleary Gottlieb, these deals aren’t just part of the practice - they’re a specialty.