On September 23, the SEC voted 3-2 to amend certain of the procedural requirements for the inclusion of shareholder proposals in a company’s proxy statement under Exchange Act Rule 14a-8.[1]

The amendments were adopted substantially as proposed in November 2019,[2] except for the so-called “momentum” provision, which would have permitted companies to exclude shareholder proposals that have decreasing shareholder support.

The final rule will, among other things, replace the current ownership requirements for submissions with a tiered approach that will require shareholders to either show an increased economic stake in a company or hold their stake for a longer period of time to be eligible to submit a proposal and will increase the minimum support thresholds for resubmissions. In adopting these amendments, the SEC reiterated its position that a shareholder-proponent needs to demonstrate a meaningful “economic stake or investment interest” in a company to have access to the company’s proxy statement and draw on the resources of the company and other shareholders. In the SEC’s view, the amendments are a necessary step to modernize the procedural requirements of Rule 14a-8 in light of the significant changes in the 20 years since they were last amended in technology, methods retail investors use to access the financial markets and ways shareholders communicate and engage with management and other shareholders.

The final rule will become effective 60 days after publication in the Federal Register and the final amendments will apply to any proposal submitted for an annual or special meeting to be held on or after January 1, 2022.  However, the final rule allows shareholders who are currently eligible to submit proposals under the current $2,000 threshold/one-year minimum holding period, but who do not currently satisfy the new requirements, to continue to be eligible to submit proposals for annual or special meetings to be held prior to January 1, 2023, provided they continue to hold at least $2,000 of a company’s securities at the date of submission of the shareholder proposal (and through the date of the relevant meeting) and comply with the other requirements of the final rule.[3]

We discuss each of the amendments to Rule 14a-8 in further detail below.

To be eligible to submit a proposal under current Rule 14a-8(b), a shareholder must have held a minimum amount of a company’s stock ($2,000 worth or 1% of the outstanding) for at least one year.  The amendments will:

A shareholder will not be permitted to aggregate ownership with another to meet either the time held or economic stake tests, but co-filing and sponsoring of proposals will continue to be permitted if each proponent meets the eligibility requirements.

With regard to co-filed proposals, the SEC encouraged proponents to be clear about co-filers and identify a lead filer in initial communications with a company, possibly specifying whether such lead filer has authority to engage or to withdraw a proposal; but it determined that adopting formal requirements is not necessary at this time.

Proposals Submitted Through a Representative

As the SEC clarified in the final rule, if a shareholder-proponent is an entity, which can act only through an agent, compliance with the amendment will not be necessary if the agent’s authority to act is self-evident such that a reasonable person would understand that the agent has authority to act (as, for example, where a corporation’s CEO submits a proposal on behalf of the corporation).

The amendments formalize in part existing guidance in SLB 14I to eliminate some of the uncertainty and burden companies bear in evaluating shareholder-representative arrangements.

The amendments will make it a little harder for an individual who is not eligible to submit proposals to arrange to serve as a representative for others who are, as the failure to comply with any new required line item will presumably render a proposal ineligible if not amended within the required time.

The final rule will amend Rule 14a-8(c) to apply the existing one-proposal limit to each person rather than each shareholder.  Unlike the current rule, it will therefore prevent any individual from acting as a representative for more than one shareholder proposal or as a proponent of one proposal and representative for a different proposal for consideration at the same meeting.

The release clarifies that the amendment is not intended to prevent shareholders from seeking the advice or assistance of advisors in preparing a shareholder proposal and an advisor may continue to provide assistance to multiple shareholders.

The release also clarifies that an entity and all persons under its control, including employees, will be treated as a single “person” for purposes of this amendment and that a single representative will still be allowed to represent multiple co-filers in connection with the submission of a single shareholder proposal.

The amendments intend to prevent evasion of the one-proposal limitation, e.g., through the practice of some prolific shareholder-proponents of acting as representatives for several shareholder proposals.  The SEC continues to regard the limitation as appropriate.  In the proposing release, the SEC sought comments on whether it should eliminate altogether the ability of shareholders to appoint a representative; however, it didn’t touch on this point in adopting the final rule.

The amendments will require a shareholder-proponent to provide contact information and a written statement that he/she is available to meet with the company in person or via teleconference at specified dates and times (within regular business hours of the company’s principal executive offices)[4] during the period between 10 and 30 calendar days after submission.  The contact information and availability must be that of the shareholder, and not that of the shareholder’s representative, if any. However, the representative may participate in any discussions between the company and the shareholder.

If a proposal is submitted at or near a company’s deadline for receiving proposals, the company will have a short amount of time to prepare and submit a no-action letter request.  Accordingly, the amendments might incentivize management to engage with shareholder-proponents as soon as possible after submission in case management would like to assess whether the proposal might be withdrawn before starting preparing a no-action letter request.  Companies should make sure they have a process in place to quickly raise the engagement periods to management and investor relations given the short timeline.

The amendments might also force management to engage with shareholder-proponents before it is clear whether procedural or eligibility deficiencies, if any, will be cured.

While the SEC provided additional color in the final rule on what should happen when a company is not available during the time windows identified by the shareholder-proponent or when the shareholder-proponent’s availability changes, it remains to be seen what the practical effects of this engagement requirement (such as potential increases in withdrawals of proposals upon agreement between the company and the proponent) will be absent an enforcement mechanism of some sort.  The final rules did not adopt any penalty for failing to engage or specify any specific engagement activities between the shareholder and the company.

A company is currently permitted to exclude a shareholder proposal that deals with substantially the same subject matter as a proposal voted on in the last five years if the proposal did not receive a minimum level of support the last time it was voted on.  The amendments will raise the minimum support thresholds as follows: 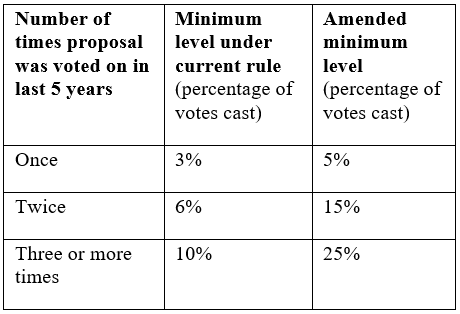 The amendments will not, as initially proposed by the SEC, allow a company to exclude a proposal that would not otherwise be excludable under the 25% threshold but for which support declined by 10% or more compared to the immediately preceding shareholder vote on the matter (the so-called “momentum” provision).  As the SEC acknowledged, this proposed amendment could have led to anomalous results and would have rendered the resubmission basis for exclusion unnecessarily complex.

The amendments reflect some SEC sympathy for companies’ complaints regarding diversion of time and resources to “zombie” proposals that do not show a realistic prospect of obtaining broader or majority support in the near term.  The SEC declined to adopt an exception to the rule that would apply in the event of a change in circumstances warranting resubmission as such a provision received little support among commenters and would be difficult to apply in practice.

The amendments have raised, since their initial publication as proposed amendments, significant opposition from investors and organizations representing their interests, which view these changes as a significant limitation to their ability to effectively engage with the companies they own.

Commissioners Crenshaw and Lee, who both dissented, shared similar concerns.  According to Commissioner Crenshaw, the amendments inappropriately shift the costs of the shareholder proposal process to investors, and particularly smaller investors, who will need to choose between maintaining a diversified portfolio or investing a substantial portion of their portfolio into a single company to have their ideas heard.[5]  Commissioner Lee also pointed out that the amendments will stifle, rather than encourage, engagement around ESG-related issues, which have received increasing support on proxy ballots in recent years.[6]

Before the adoption of these amendments, the Council of Institutional Investors (“CII”) and other signatories had also requested the SEC to re-open the public comment period. [7]  The request followed the submission by the Chief Economist of the SEC’s Division of Economic and Risk Analysis (“DERA”) on August 14, 2020—more than six months after the public comment deadline—of a memorandum disclosing a preliminary draft analysis conducted by the DERA staff as of October 4, 2019 on the potential impact of the proposed amendments to Rule 14a-8 (the “DERA Memo”), which suggests a much greater impact of the proposed amendments on investors than the analysis previously disclosed by the SEC in the November proposal.[8]  While it is unclear why this analysis wasn’t disclosed earlier, the SEC concurred with the conclusions of its Chief Economist that, as a result of significant limitations in the data used, the analysis could not be used to reliably assess the potential impact of the amendments on retail shareholders.[9]

Looking ahead, it’s worth focusing briefly on Commissioner Peirce’s words about the SEC’s adjudicatory role in the context of excludable shareholder proposals. In her statement,[10] Commissioner Peirce advocated for the adoption, in the short term, of interpretative guidance for the staff and the markets on how to determine when a matter rises to the level of a “sufficiently significant social policy issue.”  She also more generally questioned the appropriateness of having Rule 14a-8 at all, as this rule, besides having a questionable statutory authority foundation, forces the staff to spend time sorting through weighty issues, many of which don’t even relate to a company’s shareholders but to its stakeholders.

Finally, we note, in view of the upcoming election, that any change in SEC Commissioners could prompt new consideration of the issues raised by investors on their ability to submit proposals under Rule 14a-8 as amended.  Additionally, the amendment could be reviewed under the Congressional Review Act (as it was designated a “major rule”) and thus could potentially be overturned by a new Congress.

[3] The delayed application for current shareholders leaves existing shareholders in companies on the same footing as today since, at the end of the transition period, they would be eligible to submit proposals under the amended ownership requirements having held $2,000 for at least three years.

[4] Companies may begin to disclose the regular business hours of their principal executive office in the proxy statement with the deadline for submitting shareholder proposals.

[5] Statement on Procedural Requirements and Resubmission Thresholds under Exchange Act Rule 14a-8 (Sept. 23, 2020), Commissioner Caroline A. Crenshaw, available at https://www.sec.gov/news/public-statement/crenshaw-14a8-2020-09-23-0.

[9] As Commissioner Lee points out in her dissent, this economic data was not included in the adopting release and was only discussed in the release to defend the decision to omit it from the proposal and from the adopting release, “not to reckon with the cost the data illustrates: that retail investors will be greatly disenfranchised by these changes.”