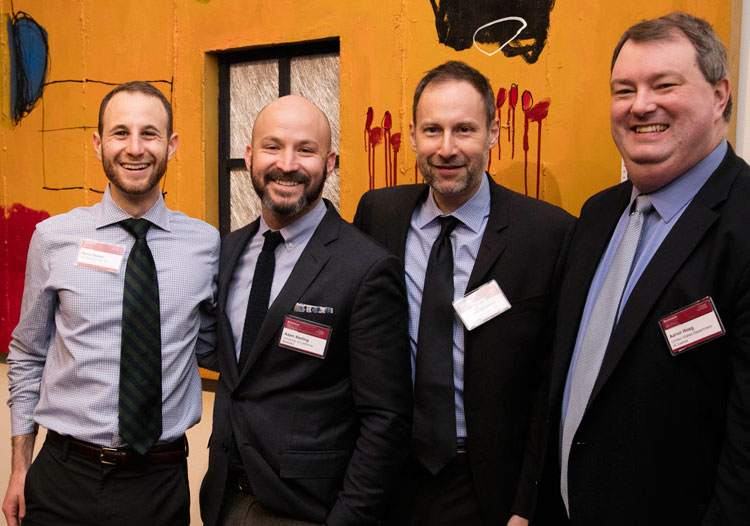 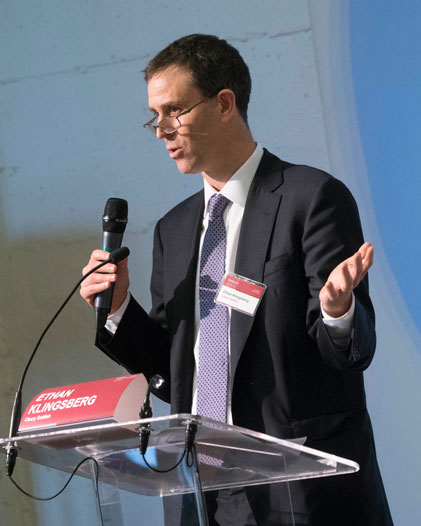 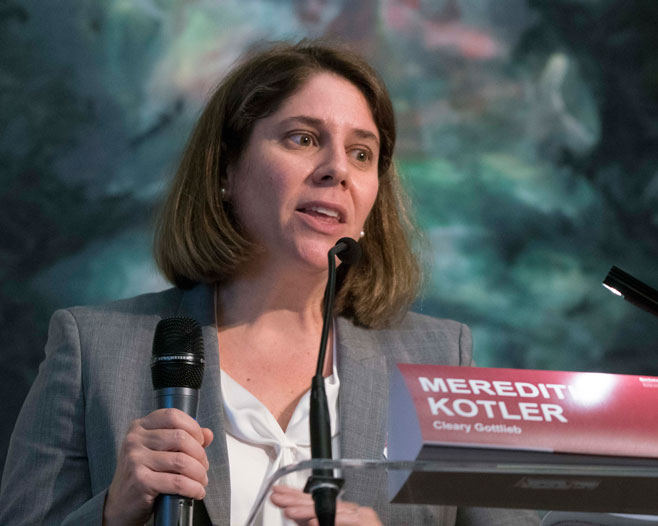 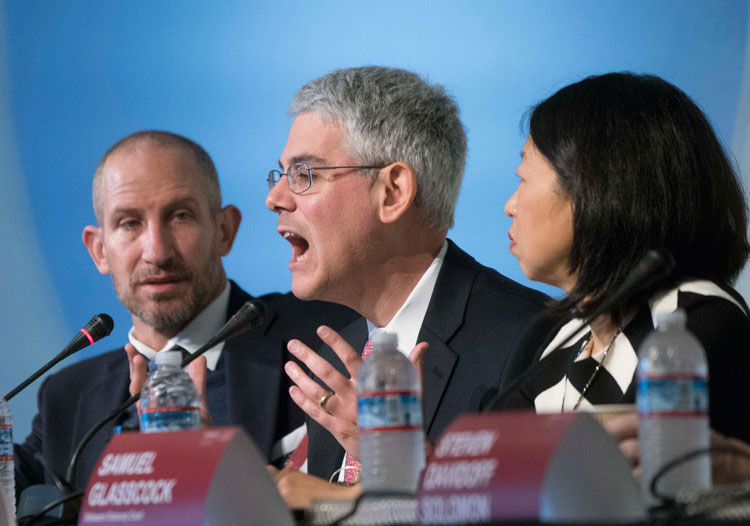 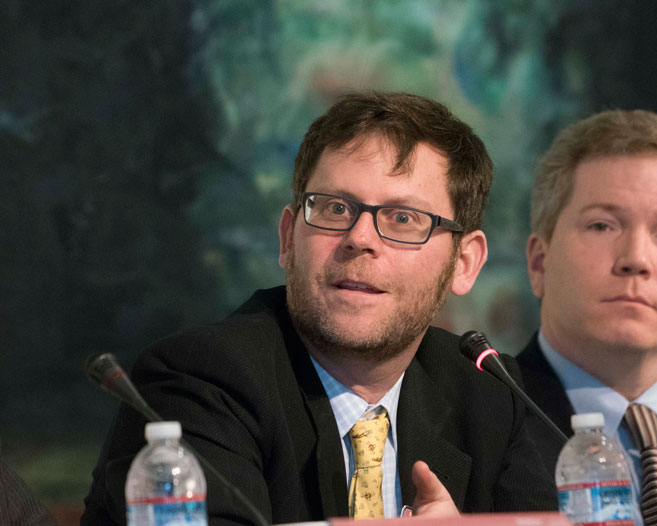 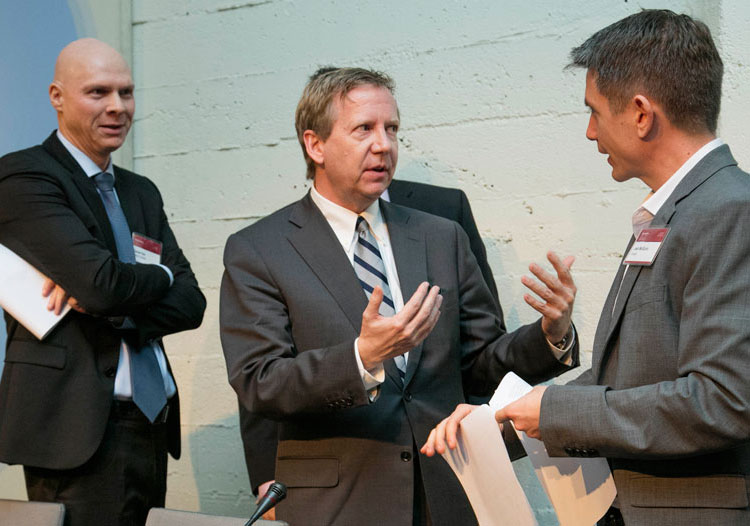 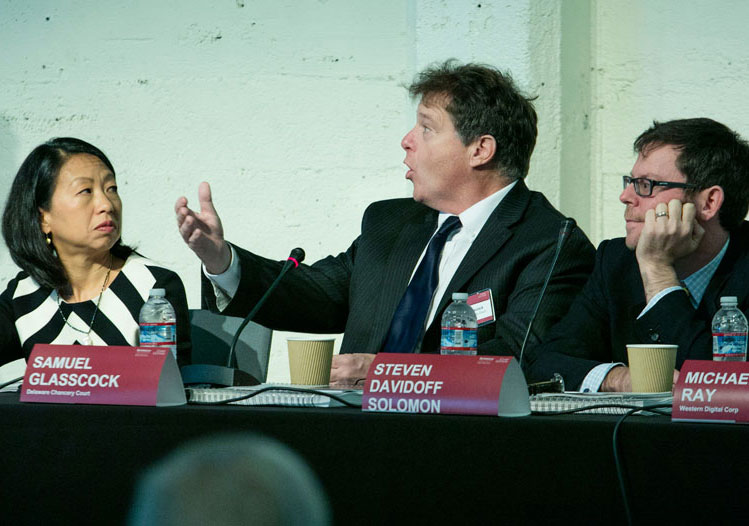 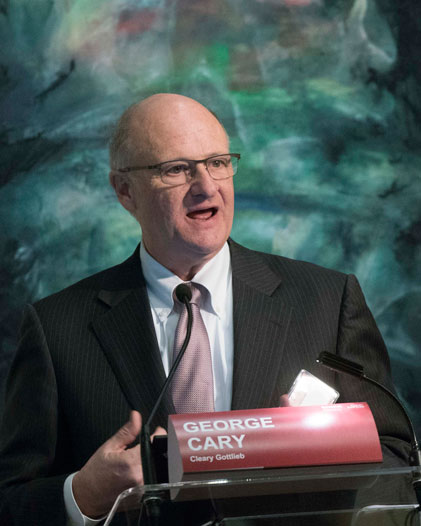 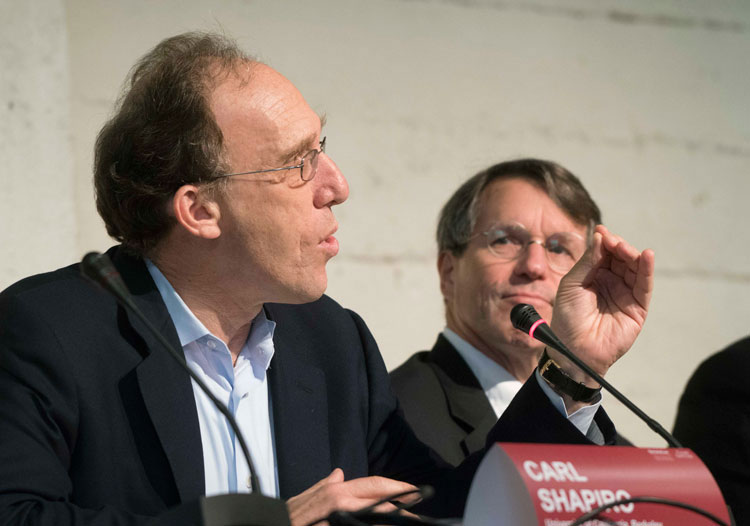 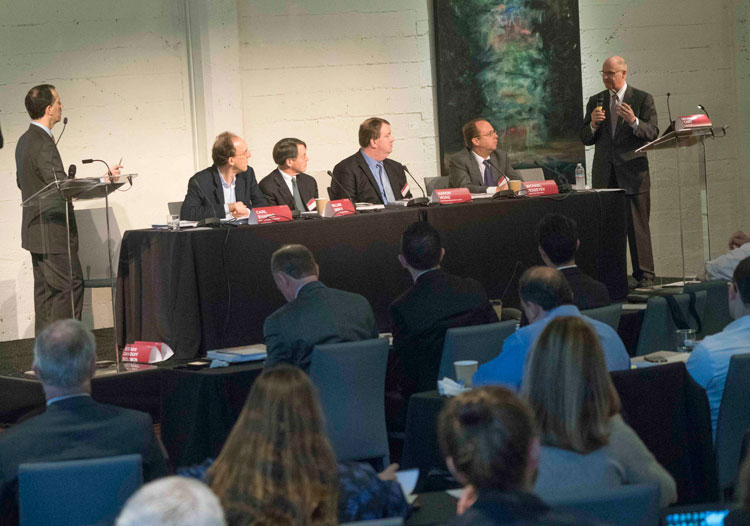 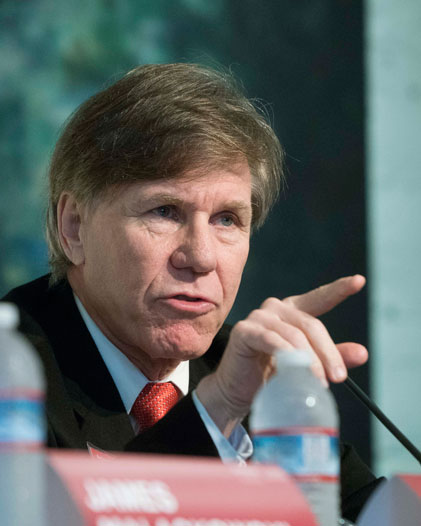 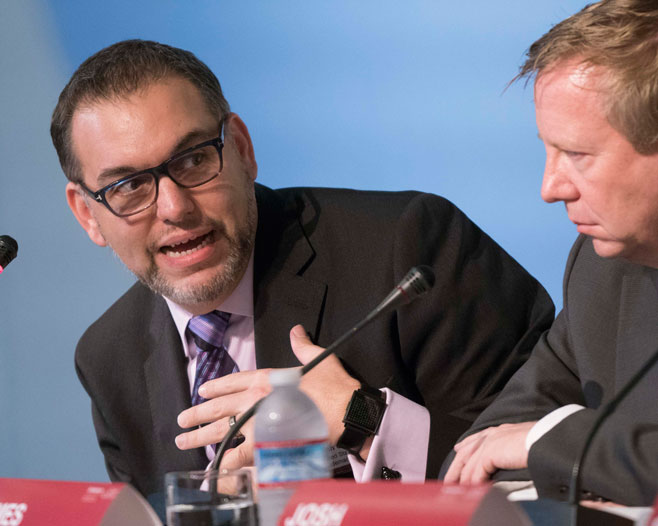 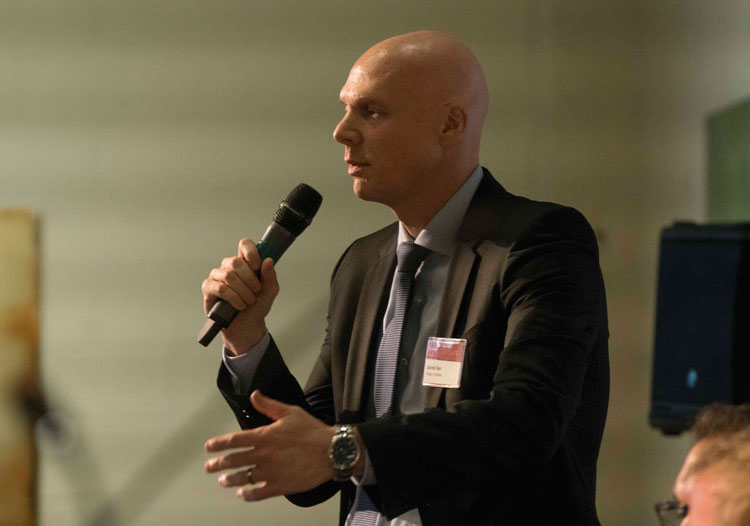 We were glad to see over 150 of you in San Francisco for the lively discussions on “Antitrust, IP, Board Processes and M&A in 2016: Challenges and Conundrums for the West Coast.”

Among you were senior personnel from law firms, in-house legal departments, financial advisory firms, proxy solicitors, shareholder engagement advisors, public relations firms, the Delaware Court of Chancery, the Federal Trade Commission, the Department of Justice, the Federal Circuit and District Courts, the Silicon Valley U.S. Patent & Trademark Office, the media, and the University of California, Berkeley Law School and the Berkeley Center for Law Business & the Economy, the event’s co-sponsor with Cleary Gottlieb.

Below are key takeaways from the day’s discussions.

The first session featured contributions from:

Facilitated by Cleary Gottlieb partners George Cary, a former Deputy Director of at the FTC, and Mark Nelson, the session focused on the challenges of enforcing antitrust laws to the dynamic and innovative tech and media sectors. The sessions focused on lessons from two recently litigated cases—Bazaarvoice and Steris/Synergy—and two mergers that were abandoned by the parties after federal agency opposition—Applied Materials/Tokyo Electron and Comcast/Time Warner.

The session kicked off with a lively discussion by the officials from the DOJ and FTC about the factors that the agencies consider when looking at deals involving new and fast-changing markets—and the extent to which these analyses differ from deals involving more traditional industries. Judge Orrick added insights on the role of the courts in this enforcement process, while Mr. Shapiro explained how economic analysis might differ in a dynamic market vs. more traditional industries, including the challenge of demonstrating that the market is able to resolve competitive issues on its own in industries where new technologies displace older ones relatively frequently. The perspectives on the differences between how to be effective during review by the agencies and review by the courts was especially useful for practitioners.

The discussion then turned to the role of customer input in Comcast/Time Warner and Applied Materials/Tokyo Electron and how the Bazaarvoice trial was able to result in a finding of violations of the antitrust laws, despite the dearth of customer testimony.

Next, the session focused on the strengths and weaknesses of the assertion, often used in defense of tech mergers, that one of the cash-rich, mega-cap tech giants is an inevitable threat to enter the market and therefore the merger of two current market participants should not be of serious concern. This led to an exploration of the FTC’s contention in Steris/Synergy that one of the merging parties was allegedly a committed future entrant into the market and the concern in Applied Materials/Tokyo Electron about the impact on future innovation, even though the parties did not overlap much in their current product offerings.

The session concluded with a practitioner raising concern about the impact on upcoming negotiations with the agencies that may result from the recent financial failures of two “upfront buyers” of operations divested as part of merger settlements with the agencies. The session discussed the intensity of the process and the need for companies to pay attention to the timeline required to identify a “qualified buyer” for divestitures, as well as how this process has evolved from the perspective of the agencies, and what merger parties can expect going forward.

Session 2: The Changing Landscape of Patent Value and Patent Risks

The second session featured contributions from:

Facilitated by Cleary partner Daniel Ilan, who himself was lead IP counsel on the largest stand-alone patent sale in history, the session focused on the impact of the very recent and dramatic changes in the patent landscape on patent valuation, transactions and IP-driven business models. Among the developments of which the session explored the significance were:

After discussion of the latest uncertainties created by the Supreme Court’s Alice v. CLS Bank decision in 2014, including in connection with the application of the “abstract idea” exception to patent subject matter eligibility, the discussion turned to an exploration of the impact that this uncertainty has had on innovation, particularly in software-related fields. The session further discussed steps that the USPTO has taken to provide clarity to those seeking to file patent applications covering software-related inventions.

The session then delved into the patent strategies available to companies against this backdrop and the extent to which these different strategies would incentivize and impede innovations. Distinctions were drawn between the impact on pharmaceutical product development vs. software and consumer tech innovation. In addition, there was debate about how the legal framework would continue to develop as these strategies evolved.

The session eventually focused on the multitude of ways to extract value from a patent, whether through litigation, sale or cross-licensing, which may be especially useful for companies entering new areas of technology. The participants discussed the interplay between patent value and the sale of patents to nonpracticing entities that act as “trolls.” After discussion about the future of nonpracticing entities, the session discussed the facts and circumstances behind the rise and fall of the value of standard-essential patents (SEPs) and software patents, how the rules from the standards bodies are likely to develop in the near term, and the approaches of different companies to SEPs and software patents.

The session’s focus next turned to the effects that recent statutory changes have had on patent valuation and transactions, including those changes that make it easier to invalidate patents, limit available damages for patent infringement, and increase the risk that a plaintiff would be forced to pay the defendant’s legal fees. The participants analyzed the connection between the reduction in transactions focused on monetizing a single patent family and the increased uncertainty in eligibility for damages remedies. In addition, these analyses looked at how transactions for larger portfolios were becoming more common as buyers arbitraged their risk across a broader set of patents.

The session then provided a helpful outline of and exchange of experiences with how non-U.S. jurisdictions are increasingly playing important roles in patent valuation, including patent-favorable trends under the German and Chinese intellectual property regimes.

The session ended with a number of participants advocating for certain priorities for further patent law reform, including addressing forum shopping, aligning USPTO Patent Trial and Appeal Board proceedings with District Court processes, and recognizing the need to give the market more time to react to the recent changes before “rocking the boat” again.

The final session featured contributions from:

Facilitated by the corporate/litigation tag-team of Cleary Gottlieb partners Ethan Klingsberg and Meredith Kotler, the session delved into a series of recent developments in private and public M&A.

The session began by reviewing the primary legal challenge faced during buy-outs of startups in the current down market. Common stock in startups is increasingly held by sophisticated institutions that are not litigation-shy when there is a sale with the following characteristics:

The session reviewed the Delaware case law to date that has addressed these scenarios, as well as the pending post-closing challenge to the buyout of Good Technologies by Blackberry. After discussion of the latest thinking about appraisal rights and entire fairness doctrines, the following practice points emerged.

The session then discussed the legacy of Delaware’s Cigna decision for buyouts of widely held but unlisted companies, such as the typical VC-funded M&A target. As a result of Cigna’s narrow reading of the definition of merger consideration, a number of merger agreement provisions, including indemnification and stockholder representative provisions, have been left unenforceable against any stockholder who fails to sign a joinder (as opposed to a letter of transmittal), while the merger consideration provisions remain binding on all holders simply by virtue of the consent of the holders of 50.1 percent of the voting power.

After noting some of the contractual acrobatics that can mitigate some of the impact of Cigna, the session floated the novel idea of an amendment of the DGCL to expand the scope of permitted collective action beyond merger consideration by permitting specified “non-merger consideration” provisions, such as the appointment of a stockholder representative or a limited indemnity, to be binding on all target shareholders by virtue of a 50.1 percent approval. The discussion explored ways to avoid making such a concept non-coercive.

Next steps on this front may well include constructing and working out this type of statutory amendment in conjunction with the Delaware bar. It certainly would be attractive for facilitating the use of the DGCL merger statute for buyouts of many startups with broad shareholder bases.

Processes for Boards and their Financial Advisors

The session then turned to the rise of fiduciary duty suits that focus on flaws in the relationship between boards and their financial advisors, especially in the boards’ processes for obtaining information about their advisors’ conflicts. After some discussion of the growing breadth of what types of activity may arguably constitute a conflict that the board should be taking into account and the difference between disabling conflicts vs. relationships and interests that a board should consider but that need not lead to selecting a different advisor, the session turned to a discussion of the practical limitations on complete and immediate disclosure of financial advisor conflicts including:

The session explored further the pitfalls and benefits of different types of engagement letter covenants and request lists that some law firms have created and the protocols that many banks had recently adopted. The discussion then circled back to the parameters for what would constitute good faith conduct by the advisor and board, and how the recent Corwin decision permits directors and advisors to largely insulate themselves from liability by having good disclosure in the proxy statement about advisor conflicts.

The session moved on to discuss the Delaware Supreme Court’s opinion in MFW, standing for the proposition that the deferential business judgment rule governs the review of related party transactions in which, from the time of the initial proposal, the transaction has been conditioned on approval by an independent committee and a majority of the disinterested stockholders. The room debated whether, in view of the recent grant of a motion to dismiss in the Swomley case, MFW had in fact created a safe harbor under which the Chancery Court would be regularly granting motions to dismiss challenges to related party transactions. In addition, the discussion focused on factors that continue to push practitioners to advocate that their clients forgo the execution risks of a requirement to obtain an approval from a majority of disinterested shareholders.

The session then reviewed the most recent trends in the Chancery Court’s review of settlements of merger litigation, including the proper way for limiting the scope of these settlements in which there is “disclosure-only” or other non-monetary relief. In addition, there was a lively discussion of the court’s rejection of settlements to force adversarial proceedings regarding whether plaintiffs’ counsel is entitled to fees and to discourage weak claims. The session discussed the significant impact of these trends on recent merger litigation.

In addition, the session debated whether the standard for denial of motions for expedited discovery in challenges to mergers may start to be applied more strictly as a practical matter—and the impact this may have on merger litigation. A number of war stories were discussed showing how past merger litigations had evolved, and lessons were shared on how best to prepare, settle and defend in the new environment for merger litigation.

The session wrapped up with a discussion, aided by the general counsel, proxy solicitors, shareholder relations consultants, financial advisors and practitioners in attendance, of:

Themes included the need to steer clear of ideological battles, focus on the practical and manage governance-focused shareholders judiciously.

Open in Google Maps Get Directions